Back to the Fold

Twas a sheep, not a lamb that strayed away,
In the parable Jesus told;
A grown-up sheep that had gone astray
From ninety and nine in the fold.

And why for the sheep should we earnestly long,
And as earnestly hope and pray?
Because there is danger If they go wrong,
They will lead the lambs astray.

For the lambs will follow the sheep, you know,
Wherever the sheep may stray;
When the sheep go wrong, it will not be long
Till the lambs are as wrong as they.

And so with the sheep we earnestly plead,
For the sake of the lambs today;
If the lambs are lost, what terrible cost
Some sheep will have to  pay!

A Bridge and a Star Seldom Seen

Ø  Our church sanctuary was built in 1859 by members of our congregation under the leadership of Mr. Henry Haverkotte, a builder who focused on covered bridges.  The rafters of our sanctuary resemble a covered bridge.

Ø  The construction is hand-hewn timbers, about a foot on each side, joined with out nails, built to last for centuries.

Ø  There is a bit of mystery here.  There is a stained glass window in the attic which cannot be seen from the sanctuary.  It can be seen from outside but its beautiful colors cannot be recognized.  This window shows the ‘Star of David’, a symbol many might expect to find on a Jewish synagogue rather than on a Christian church.  However in the early days of Christianity, this symbol appears in places where people of faith in God’s covenant, old and new, lived together peacefully.   This symbol and the symbol of the ‘fish’ were faith symbols for Christians before the emergence of the cross as our primary Christian symbol.

Ø  The founders of the church along with Rev. Henry Dolle, their pastor, came from a fairly liberal community of Christians in Germany who wished to be open to many of Christ’s followers.  They may have wanted to distinguish themselves from other groups who sought members only from their group or sect.  This symbol, quietly tucked away in the 150 year old bridgework above us, may provide an important link with our present.  Though this church was constructed almost 100 years before the formation of the United  Church of Christ, its builders symbolism is very consistent with our UCC bywords from John Chapter 17 “That All May Be One.”

Ø  The window faces east as do all the graves in our cemetery.  This is an old church tradition from the passages of the Bible that on the last days all will face east toward Jerusalem.

Ø  Our sanctuary, built by bridge builders, has served as a bridge in several ways.  It serves as a bridge over trouble waters for generations of people who have worshipped here, brought their children for baptism, for weddings, for funerals and have gathered friends and fellow believers to share the joys and tears with a God who loves.  It serves as a bridge between God and the generations.  As God’s house (Gotthaus), it has served as a bridge to deep faith as word, song, prayers, and silence have helped us to walk closer with God.

• Letters did not have stamps as we know today. Letters were marked either Paid or Unpaid at the Post Office. Either the person sending the letter or the person receiving it had to pay for the letter. The cost of mailing a letter was $1.50, which really seems like a lot, since a day’s wages were $.50.
• The President of the United States was James Buchanan
• The price of a hair cut was 15cents
• The Congregation of Johannes Kirche was already 24 years old, when they decided to build a New House for God. 60 foot long, by 38 foot wide, and 25 feet to the ceiling.  The man who led the building effort was an accomplished builder in the congregation, whose specialty was building covered bridges.
• Since there was no telephone, TV, or Cable…The Church Bell was an important communication tool. For various important events like deaths or births the Pastor would write up an announcement and ring the church bell. A church member volunteering for the task would ride to the church, get the announcement, and ride off to take the message to the congregation. In the case of a death the church bell would be rung at 6:00 PM on the night following the death.
• Rev. Dolle, the pastor serving here at the time the sanctuary was built, came to Huntersville by way of the Whitewater Canal.  This trip took him from Cincinnati, to Brookville, to Metamora.  Apparently he received a renewal of his baptism during the trip when he fell from the flat boat into the canal…but he was no worse for the experience.

150th Anniversary of our Sanctuary

Our current sanctuary will be 150 years old on August 1, 2010.  The church was built over the year 1859-1860 with much shared labor from the congregation under the direction of Mr. Henry Haverkotte, carpenter & builder.  The names Evangelical and Lutheran refer to the two main groups of protestant immigrants from Germany Evangelicals & Lutherans.  In the congregations early years its affiliation was Evangelical but varied with whomever was the pastor.  At the time the sanctuary was built the church functioned as a church welcoming to all German Protestants.  Many of the families who populated Huntersville and Oldenburg lived less than 5 miles apart in Germany also.  This introduces the interesting dynamic that people in these two small communities have been neighbors for over 1000 years.  Life is often far more amazing than it, at first seems.

A Parable in a Building

The bricks in the oldest part of our church building ,which was built in 1860, are sun dried or Medora bricks. They are different than the bricks used to build today. As long as they are together in a wall they are quite strong. However if one is separated from the wall and laid out on the ground in a fairly short time it will begin to return to mud. The truth is our building, like of fellowship finds great strength in standing together. Together in christ we can remain strong. If  we decide to separate ourselves from the fellowship of others in Christ  we may crumble and falter.  Together we give each other strength and God gives us strength. We invite you to come visit us. Alone we all have feet of clay. 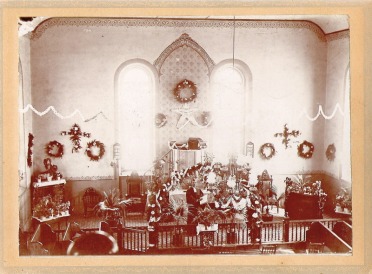 St. John’s United Church of Christ, Huntersville was the first Christian congregation in the Batesville area. It was established in 1836 by pioneers moving here from the Cincinnati, Ohio area. Our sanctuary was built in 1860 yet seeks to honor God in both a timeless and current way. St. John’s has a great history of working cooperatively with other local churches, including: one of the first cooperative Bible Schools in 1926. Today we sponsor the Easter Sunrise Ecumenical Choir which has grown over 30 years and now contains 81 members from 18 area churches.  Many of our founders came from northwest Germany from a town named Venne. When our church celebrated its 150th anniversary in 1987, the church in Venne, Germany was celebrating its 900th anniversary. The United Church of Christ is a merged denomination with over 5000 congregations nationwide.  Our National Motto is: “Wherever you are on life’s journey you are welcome here.”